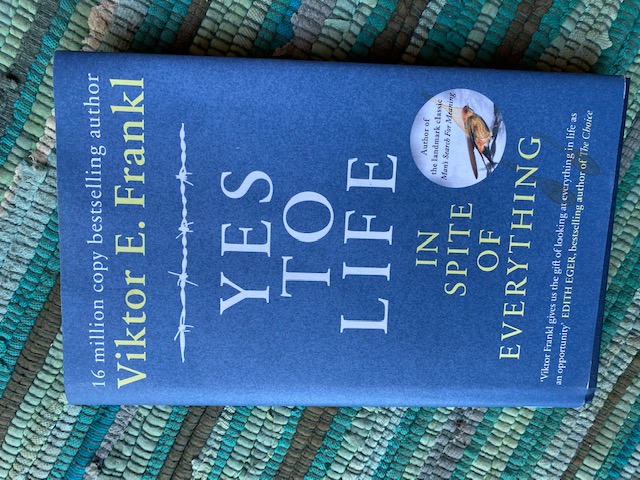 “We give life meaning through our actions, but also through loving and finally through suffering.”

Less than a year after his liberation from Auschwitzin 1945, the psychiatrist, Viktor Frankl, (author of Man’s Search for Meaning) delivered a series of three lectures miraculously retrieved from a small German publisher’s archives and published now for the first time in English under the title ‘Yes To Life In Spite Of Everything’. The language is old fashioned and formal and it often feels as if it has been translated directly from the German, but it is well worth the effort of reading.  Also the timing is serendipitous. Things haven’t exactly gone according to plan in 2020. (If 2020 was a drink it would be a colonoscopy prep, afterall… ). We could all benefit from reading Viktor Franklright now for a welcome bit of perspective. Nothing went according to plan for him either.  His family and friends were all murdered or died in concentration camps (including his parents and young, pregnant wife), his home and life’s work were destroyed, every last dream, goal and hope went completely pear-shaped. Even his avoidance of the gas chambers and the fact of his continued survival felt like drawing the short straw – death seemed like the more attractive option compared to the daily torment of Auschwitz and Dachau where he was tortured, worked and starved nearly to death.

Although our own modest suffering seems hardly noteworthy by comparison, Frankl insists that it is pointless to speak of differences in the magnitude of suffering – all that matters is the difference between meaningful and meaningless suffering. So when one loses the opportunity to play for a team dreamed of and worked towards since childhood,  or run the race one has trained for all year, or gets retrenched,  or when a precious family business folds….when a marriage flounders under the financial strain of the lockdown, when one is literally faced with the reality of being destitute or homeless….what does one do then? How to recalibrate? How does one bear the fear and the failure when things spectacularly fall apart on both a micro and macro scale? And can life still hold value? What success can there be in the absence of success?

How do we rediscover hope and meaning and find a replacement for our previously worthy goals?

This is what ‘Yes To Life in Spite of Everything’ is really all about… its easy to mistake the title for an optimistic sort of self help book.  It isn’t that. In fact its pretty bleak a lot of the time. But it resonates deeply, especially right now. There is a certain comfort in redefining a life well lived to understand that to endure disappointment admirably, to suffer worthily, even to die well when the time comes; that these can be imminently worthy goals and render life meaningful and successful even.

Frankl, from his own unspeakable experience, and with the help of stories of his patient’s suffering drawn from many years of practicing psychiatry, explains exactly how to achieve this. He sets out a blue print for achieving purpose and success even in the most dire of circumstances. He includes some priceless nuggets of wisdom and guidance, the most crucial of which follow below. (sometimes unashamedly paraphrased):

I discovered this paragraph in “Eat Pray Love” when I read it for the second time and was thrilled and charmed by the idea of a Codega, both figuratively and literally.  I want to be one when I am big. It is a worthy goal and a duty to those who come after us, to show the way to live well, suffer well and die well too when the time comes.

(“If I step into my misfortune I stand higher.” Holderlin)

Suffering, (as long as it is unavoidable), holds the possibility of being meaningful when borne well.  Endurance is sometimes the greatest achievement of all.

“These words frequently came to my mind after I became acquainted with those martyrs whose behavior in camp, whose suffering and death, bore witness to the fact that the last inner freedom cannot be lost. It can be said that they were worthy of the their sufferings; the way they bore their suffering was a genuine inner achievement. It is this spiritual freedom – which cannot be taken away – that makes life meaningful and      purposeful.”

A question that has always puzzled me, especially in an athletic context, is the following: can there (still) be value and purpose in willingly enduring hardship even when all possibility of (conventional) success has dissipated? In order to answer this in a way that is acceptable to me and congruent with Viktor Frankl one needs possibly to redefine success and adopt  a less traditional definition which allows for success to always remain a possibility:

“Success is peace of mind, which is a direct result of self-satisfaction in knowing you made the effort to be the best of which you are capable.” John Wooden

Yes to Life gave me a nudge.  It reminded me that every experience (not matter how dire) presents opportunity and choice.  It reiterated that we are not helpless victims of circumstance.  It explained (forcefully) that embracing life is possible even in great adversity and that the depth of our suffering is ultimately a countermeasure for the range of our joy.  I needed to hear all this and I needed to hear it right now.  Its truly worth the read.

Not to Mention – Vivienne De Klerk (Published by Picador Africa)

I love Sue Monk Kidd. I love her partly because she wrote her astonishing first novel (The Secret Life of Bees) at...