Not to Mention – Vivienne De Klerk (Published by Picador Africa) 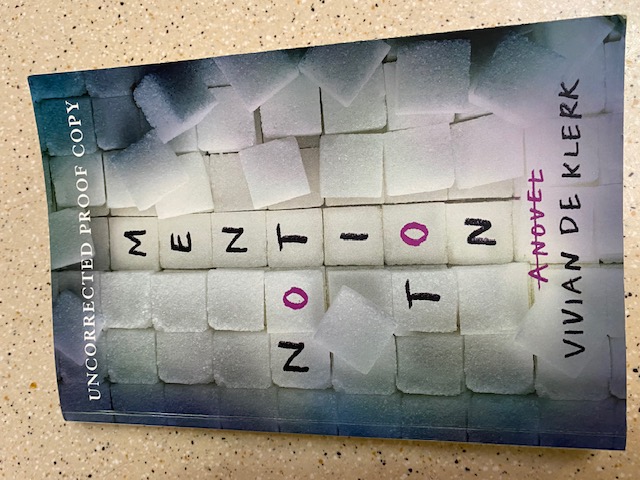 Reading ‘Not to Mention’ by Vivienne De Klerk felt like watching a car crash in slow motion and being unable to look away. Or finding myself incapable of switching off a scary movie until I know how it ends, despite watching it with the cover half over my eyes and my fingers in my ears.  Horrified fascination is what springs to mind.

I became increasingly gripped by the levels and layers of pathology, the  cunningly revealed culpability, tantalizingly and cleverly exposed, bit by bit as 21 year old Katy Ferreira fills her Croxley notebooks with cryptic crossword clues and a letter/memoir to her mother.  This is really all she is able to do at 360 kg, other than lie on her reinforced bed, read the Herald and do its crossword, gaze at a small patch of sky from her bedroom window and stuff carbs, sugar and fat down her throat in awretchedeffort to fill the gaping wounds of her desolate and shameful childhood.

She begins to write to pass the time in which she waits for her captor, her keeper and her killer to return from her lowly job at the local Port Alfred supermarket to deliver junk food to her bedside, resentfully wash her enormous, unsavory bulk and empty the various bags of excrement (she is too vast to go to the toilet)

in tight-lipped and disapproving silence.

I was unwillingly sucked into the novel, feeling uneasy, then disturbed and finally horrified.  I was frantic to intervene in some way.  To rescue the writer from her mother and from herself.  I was drawn to the character of Katy because of her vulnerability, the manner in which her voice fluctuates from upbeat to hopeless, longing for her mother’s love and care, while simultaneously consumed by rage and hatred for her.

Reading ‘Not to Mention’ felt exactly like furtively guzzling an enormous slab of chocolate all alone, then immediately wanting to be sick with shame.

I have always had a particular weakness for learned, distinguished older legal fellows. Especially those in robes....