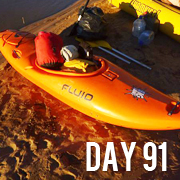 Its day 91 and hard to believe that the paddling leg of the expedition is over after 13 days and 615km. What an amazing experience it has been. We were very fortunate to have our boats sponsored by Fluid and were immensely impressed with the versatility of the “Big Bang” which is Fluid’s new expedition kayak. I am definitely in love with my new yellow boat!

With Pete and Kirsty being tied up with logistics and Hannah and only being able to join us for 3 days, I was accompanied for the whole trip by Danie van Zyl (a superbly calm and able river guide and all round good guy) and Andrew (the racing snake) from Khamkirri as well as paddling legend of note from East London, Hennie Roos (our official “probe”).

Without their combined skill and river knowledge it would have been a very different trip and I doubt I would be safely in Port Nolloth by now! We started paddling from Blouputs which is just below the Augrabies Gorge and life immediately became very simple, as it does on the river. We paddled from shortly after sunrise every day until 4pm when we began looking for a good sand bank to spend the night. After making our choice, (consider view, slope, wind direction, fishing potential, presence of firewood) we devoted the remaining daylight hours to making a shelter (please have a close look at the design excellence of the green dome erected by Hennie on most nights), collecting firewood, braaing the obligatory wheel of wors, drying our paddling gear, fishing (for yellow fish and barble), and very soon after sunset we would be in our sleeping bags.

With the river running at over a 1000 cumegs it was very unlike its usual 100 cumeg self; many of the known rapids are barely discernable at this level while new and unexpected ones surprised us on many occasions. The fast moving water helped our speed enormously and we were able to cover 50 km or more on most days. Despite the fact that it almost never rains in the Richtersveldt, we had 2 days of intermittent rain and gail force winds and freezing cold before the Northern Cape restored itself to its usual clear hot days and chilly nights.

Despite some unplanned swims, the odd unexpected weir, sections of unbelievably wild white water and constantly aching shoulder (and laugh) muscles it was one of the most memorable 2 weeks of my life. What awesome memories of fish eagles, black eagles, kingfishers of every sort, spectacular scenery, full moons and sunrises and sunsets. What a privilege to have the beloved country as our playground!

The transition to running again has been infinitely harder than I anticipated. With my usual naive optimism I was convinced that it would be effortless to slip back into the routine of running which is my favourite discipline. After 2 days of my usual marathon a day I am more crippled and stiff and sore than I have ever been before (even after the Addo 100 miler!) and have blisters and black toenails despite years of avoiding these afflictions irrespective of the amount of mileage I covered! After having cycled and paddled for the last 2 months I should have expected nothing less.

[noteblock] Tomorrow we head down towards Kleinzee and on to Hondeklipbaai on our way down the West Coast after a fantastic stay in Port Nolloth at the beautiful Bedrock Lodge. [/noteblock]
Author: Kim 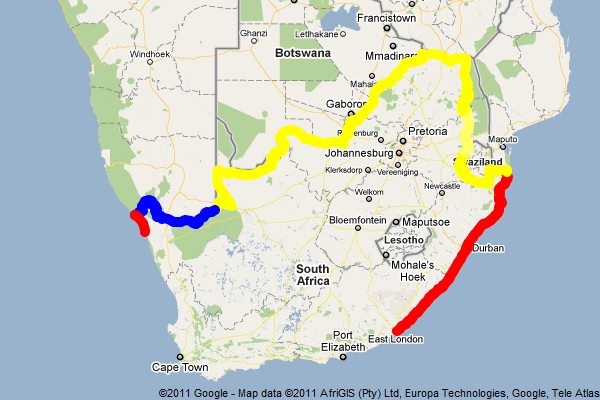 Kim is running with a local by the name of Deon today and they are heading off to Port St Johns. Week 2 here we come...