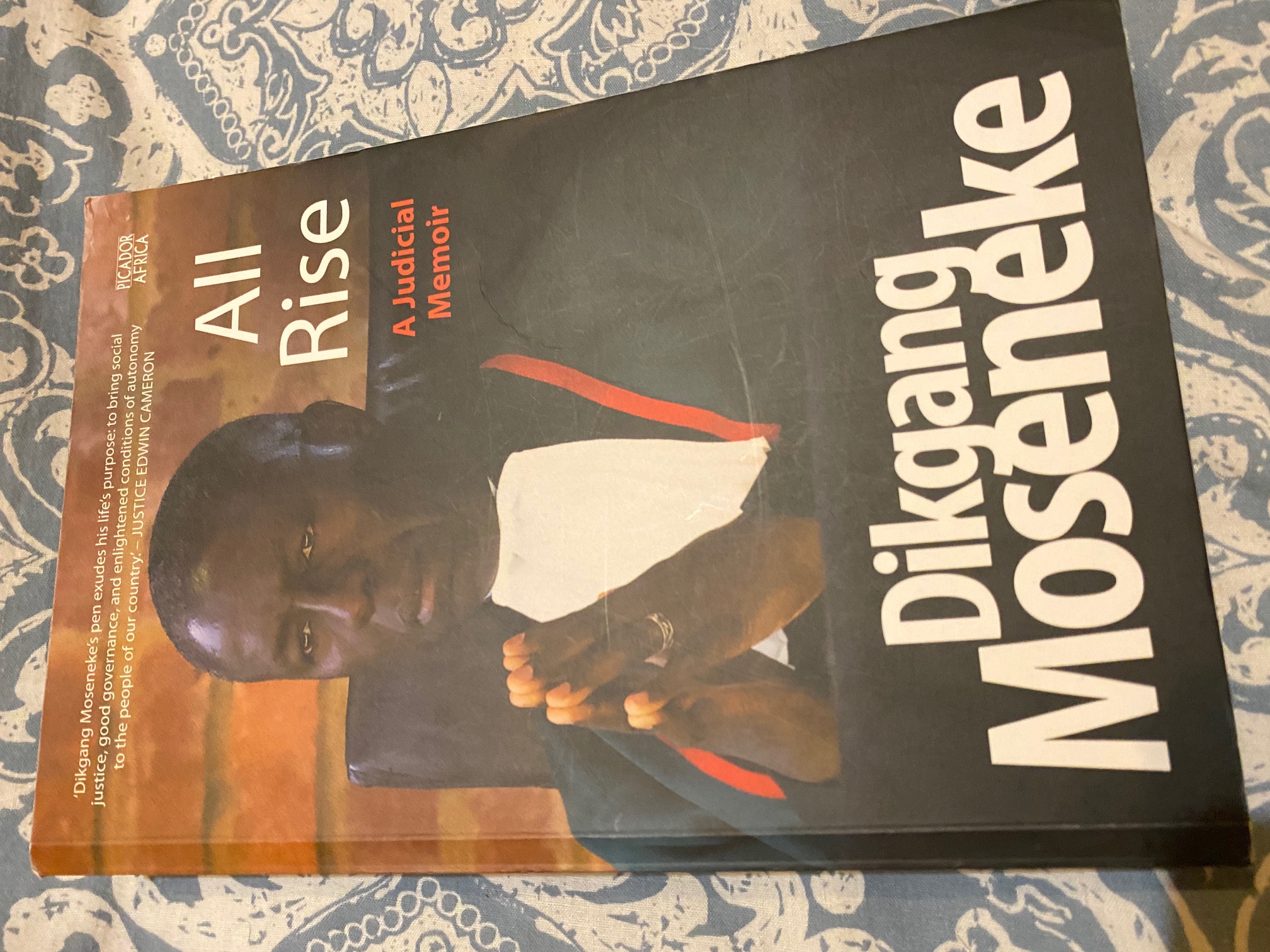 I have always had a particular weakness for learned, distinguished older legal fellows. Especially those in robes.  It may have to do with spending the school holidays of my formative teenage years working at a small town law firm, influenced by old-fashioned judges, advocates and attorneys.  (One particular lawyer would bow to me formally every morning as I passed him on the street.  He was returning to his chambers from the deeds office, I was dropping documents at court, a lowly messenger and runner of errands.  I was entranced by his formality.  He became my daily fix.)

Under the circumstances then it was not surprising that I would be drawn to the judicial memoir of the honorable justice Dikgang Moseneke.  One only has to look at him to know he would tick all my boxes.  Nevertheless, despite my frivolous reasons for wanting to do so, this was not an easy book to read.  It’s not a light holiday read or a book for the faint hearted.  It demands that you bring your full faculties to the table and engage with the writer as he takes you on the journey of his legal life and wrestles with legal concepts and decisions and extracts from the record of key cases.  There were times when I thought I should make notes.

(In the acknowledgements section, the author thanks Andrea Nattrass of Pan Macmillan who repeatedly told him: “This is an important book.  It must be done.” I agree with Andrea.  It is indeed an important book and it must be read too.)

It is difficult to imagine the lack of mercy that could have sent a 15 year old Dikgangto Robben Island for a decade of punishment in 1963 for his part in “a joint attempt to overthrow the government”.  He used the evenings of those ten years of hard labour to his advantage (and to ours) and emerged from his incarceration with a matric and a post-graduate degree in law from UNISA.  He practiced law during the apartheid years as an attorney and later as an advocate. After 1994 he became a judge of the high court and finally for the last 15 years of his formal career, a judge of the Constitutional Court.  (He also served as a member of the team responsible for drafting the interim Constitution in the heady 90’s when I was at University and we all had crushes on Roelf Meyer and Cyril: the undisputed superheroes of the constitutional process.)In the latter part of his fifteen year tenure at the Constitutional Court he served as deputy chief justice.

After reading this book, the robust and practical power of the South African Constitution was reinforced for me.  But not only is this an excellent history of our Constitution, it reminded me of how far we have come as a nation in the implementation of our Bill of Rights.  With folk often baying for the return of the death penalty, it is useful to be reminded of the fact that a full bench of judges came to the unanimous conclusion that capital punishment is inconsistent with the ground rules of our constitutional ethos.

It pointed out once again the extent to which politics and government is held at bay by those who guard the guardian (the Constitutional Court) and by the rule of law. It is important that an often emotional and largely uninformed public understand that “as a judge I was duty-bound to do what the demanded of me and not what the ruling elite and its supporters might demand.  Impartiality is a central pillar of the judicial role.  Judges have a duty to mediate the vertical power relations between citizens and their government…..”

The author unflinchingly sets out the details and the sordid circumstances surrounding the many legal cases involving Jacob Zuma and the rumors of the transgressions of John Hlope and Jeff Radebe. The esteemed Justice Cameron (who Dikgang affectionately refers to as his “jurisprudential lover”. Oh my oath!  To be the jurisprudential lover of a legal mind of this caliber! Swoon!) says in the preface: “Dikgang’s memoir soberly gives the incontestable facts.  He then invites the readers to make their own assessment.” I was grateful for the opportunity to do that.

There are so many nuggets of wisdom in his writing.  Too many to possibly quote, although this is one which particularly spoke to me:

“Good judges listen to even to views they find meritless.  This allows one to keep what we call an open mind. One’s own initial view may well be wrong and may be corrected and altered only when one listens to the other view.”

Justice Moseneke is a humble, brilliant, moral, compassionate and deeply principled man. With his perpetual quest for social justice combined with the brilliance of his mind and the elegance of his pen, I was reminded of all the reasons that inspired me to study law in the first place.