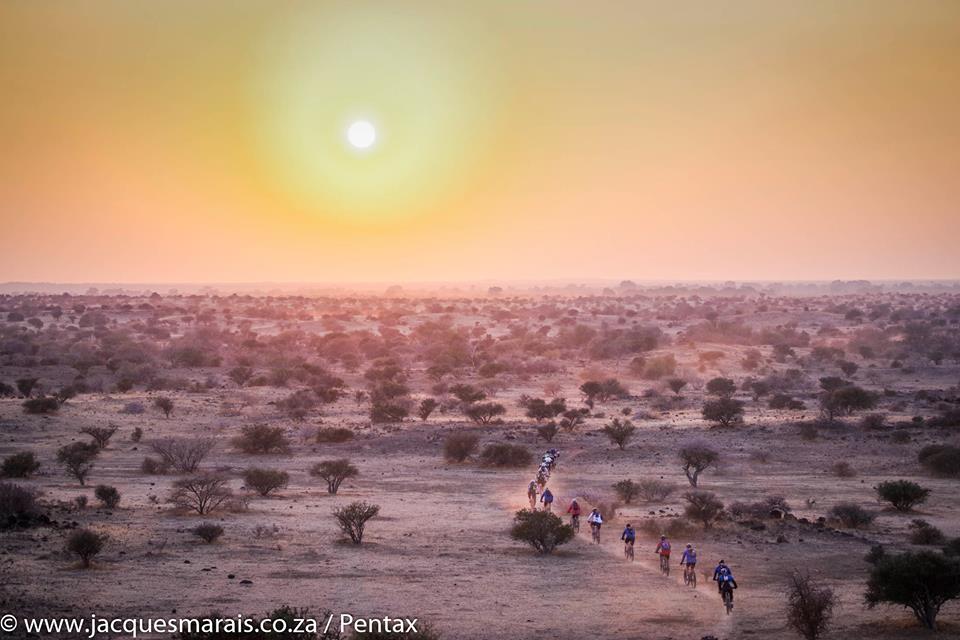 Peter has done Nedbank Tour de Tuli (TdT) for the last four years and I have always suffered from the most horrendous and ill concealed fomo (admittedly this was based more on hisdescriptions of the food, the cappuccino’sand the landscape than on the actual riding part).  But because I am a trail runner rather than a mountain biker (I confess that I don’t actually use my cleats) it was rather difficult to justify my sulkiness.

The Tour is a completely extraordinary concept.  It is not a race (which immediately appealed to me) and focuses more on the journey than on the destination.  It allows cyclists the surprising freedom and privilege of riding in wilderness areas, following ancient game trails, through pristine areas of Zimbabwe, Botswana and Mapungubwe in South Africa.  The organisers, together with officials from the 3 countries, in an extraordinary demonstration of collaboration, actually arrange temporary border posts along the route to facilitate the cyclist’s movements between the countries. In addition to giving the 300-odd cyclists the time of their lives, the purpose of the event is both worthy and inspiring: TdT raises funds for the Children in the Wilderness Programme (Children in the Wilderness is a non-profit organisationsupported by ecotourism company Wilderness Safaristo facilitate sustainable conservation through leadership development and education of rural children in Africa. Just saying;-))

Although Peter had regaled me with TdT stories for years, nothing prepared me for the infrastructure that the TdT staff and volunteers manage put together in the middle of nowhere.  There is a meticulous and luxurious tent village (in fact over the course of the Tour there are 4 such villages), which appears to have been laid out by members of an OCDC support group.  In addition to the individual tents for every cyclist, the village includes (but is not limited to)a fabulous dining tent (and invisible mobile kitchen) set up with seating for hundreds of people, a bar (staffed by folk who inexplicably burst into song when you order a gin and tonic), a superlative coffee station (sponsored by “Bean There”), a support desk which tends to every diverse need including the charging every imaginable device and a station providing endless 32GI energy and recovery drinks.  There is also a bike hospital staffed with mechanics that cheerfully deal with bike issues ranging on the spectrum from Band-Aid to ICU for 24/7. I believe that somewhere at a discreet distance, in a secluded spot, a massage tent is set up to pamper the tired muscles of the cyclists.  I will have to sample their offerings in 2018 if I am fortunate enough to return because my most exhausted muscles were routinely my abdominals as a result of extended guffawing at the hilarious antics of Group 14.  And I didn’t feel entirely comfortable asking for a belly massage after 5 meals a day!  Also, largely due to our semi deprived and Calvinistic up-bringing, Peter has managed to convince me that getting massages too often makes one soft and spoiled and should therefor be avoided at all costs so as to make managing actual hardship easier …or something like that.

I left my placement in a group entirely in the hands of the organisers with my only instruction that I should be in a group, which did not include Peter (so as to give him room to shine, of courseJ).  I don’t know if everyone on TdT was as delighted with their Herd as I was but Group 14 exceeded all my expectations.  They were loosely comprised of two odd family groups (one of which was made up entirely of brother’s-in-law), an utterly bizarre band of friends / business connections including 2 individuals with satisfyingly dark world views (and very chiselled physiques), an Irishman to whom nobody would admit any connection at all (who seemed inexplicably drawn to all things Austrian), our delightful “embedded journalist”, two fearless leaders (one of whom not only tolerated but actually encouraged my rock collecting obsession) and me.  In my opinion, Group 14 was pure alchemy.  It totally worked.

It felt like the best of both worlds to be doing TdT with Peter (who was one of the leaders in Group 2) and sharing the unforgettable experience and time in the afternoon and evening with him while being able to bond with my own group who were happy to move at a pace with which I was entirely comfortable.  I love the idea of the Tour becoming more of a family orientated event (as I mentioned previously, there were 2 family groups in Group 14 and I loved the dynamic and additional diversity this element brought to the experience). I think that a lot of the predominantly male cyclists (who were initially perplexed wrt why we would want to do it together) perhaps saw the benefit of having a shared (but separate) TdT experience with their partners or adult children.

The riding part began for Group 14 at the civilised hour of approx. 7.30 every day as the groups are staggered at approximately 10-minute intervals to ensure a level of solitude for each group.  Day one (about 65km) took us from the Limpopo Valley Camp near Pontdrif Border to the Amphitheatre Bush Camp (Botswana) and included the highlight of one of our band of merry men in Group 14 exploding the zip of his cycling top shortly after brunch, forcing him to briefly expose us to the drama of nothing but a lycra bib and matching sleeves.

One of my concerns about the Tour was that I would be unable to quickly or efficiently deal with a mechanical problem if/when it arose.  I really needn’t have worried.  It was hilarious to watch the wild excitement that erupted among the menfolk of Group 14 whenever any small mechanical issue arose.  They became extremely animated and a small Mexican wave of elation seemed to sweep through the group.  Everyone would delve excitedly into their personal tool kits and then frantically brandish their own tools in the air insisting that theirs was the most suitable/robust/state-of-the-art for the job at hand.  They would then wrestle each other for the privilege of the repairing the problem while everyone else (male) loudly offered insults or advice in a tight circle around the chosen mechanic.  Despite my strong feminist inclinations I was quite happy to lead the clapping and cheering contingent (I’m a runner remember so I have absolutely no clue what to do with a broken de-railer and had no idea that a tyre was able to burp!)

Day 2 was our shortest day (50 km) and took us on a beautiful circular route back to The Amphitheatre.  We took our time on day 2 and really soaked up the beauty and stopped to search for beads and pottery in the abundant middens and to collectbeautiful crystals and agates, to climb up to Rhodes’ Baobab for the spectacular view (and for our heart rates to normalise after a truly incredible elephant encounter).  Day 2 was also the day of my spectacular wipe out in a riverbed.  It was captured on film by the ever-vigilant Carl and quickly went viral in the camp that night. If one cannot bring glamour or technical/mechanical skills to the group there is an obligation to contribute something.   Entertainment was the obvious remaining choice and I feel that I did admirably in that regard.

We had been warned that Day 3 was far and tough included the kilometre wide Limpopo River crossing into Zimbabwe.  As a result of anxiety around a long hot day in the saddle I made the rookie error of changing my pre ride routine and skipping red wine at dinner.  I also slept poorly because of the combination of snoring and the roaring of a lion that seemed to be patrolling the perimeter of the camp.  I was so traumatised by the drastic measure of foregoing my wine that I had to raid Leigh’s pharmacy around the mid way mark to deal with the shock induced headache that was the result.  Lesson learned!  We arrived much later than usual at the remarkably beautiful Maramani Camp on the Limpopo River after about 75km (if you took Mile’s short cuts) with the majority of Group 14 slightly grumpier than usual because of the fact that the promised fast flowing downhill failed to materialise and was replaced instead by thick sand, up hills and relentless “hak en steek”.  The night spent at Maramani camp will not be easily forgotten.  The 4 women in Group 14 went off for a shower leaving the remaining members unsupervised for perhaps 45 minutes.  When we returned a corridor party had erupted in the walkway between our tents, Adam could have been blindfolded with a shoelace, one of the family groups were trying to assault the Irishman with their knife collection, somebody lost his wedding ring and a large number of folk lost their tents during the course of the evening.  When Pete came round to join the fun he was informed that the Group 14 Corridor was a sanctuary and that he was only permitted to enter if I decreed it and my decision was ratified by the entire Group. I did worry throughout the night that some of Group 14 might disappear into the croc-infested Limpopo during the course of the night not to be seen again.  I was amazed by their resilience at 7.30 the next morning when they were all present and accounted for at the start.

The 4th and final day of the Tour takes the cyclists back into South Africa and finishes at the Mapungubwe Camp.  This was a particularly special day for me as I am utterly enthralled by the magnificently beautiful combination of majestic Baobabs and massive rocky outcrops of sandstone.  There were a number of times where I simply had to stop and marvel at the sheer drama of the landscape.  It was all over far too quickly and before I knew if I was saying goodbye to the people who had become family in 4 short days and heading away from thatextraordinarypart of our continent and back to comparatively bland reality.

So when one’s first ever exclusively mountain biking event is the Nedbank Tour de Tuli, where do you go from there? I think it can only be downhill all the way…I am trying to come to terms with post TdT depression: transitioning from 5 spectacular meals a day to a meagre 3, missing the magical beauty of the landscape and the hilarity of the astonishingly special Group 14 and considering actually getting to grips with those cleats. 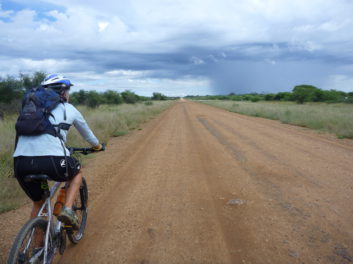 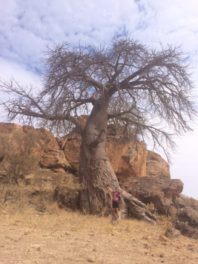 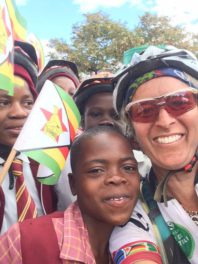 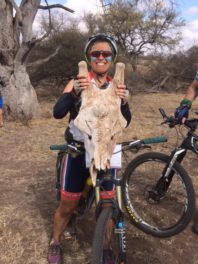 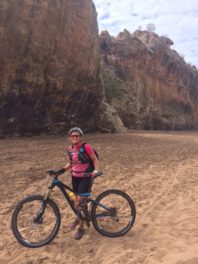 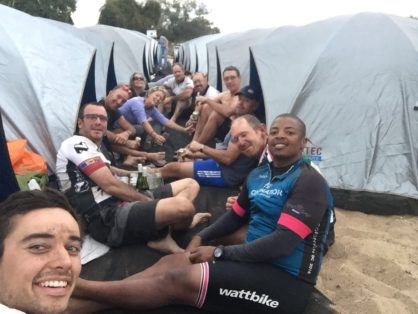 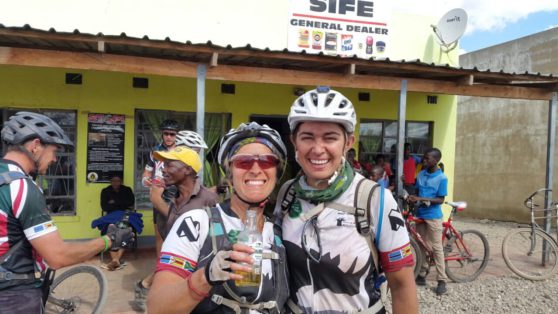 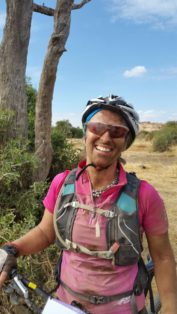 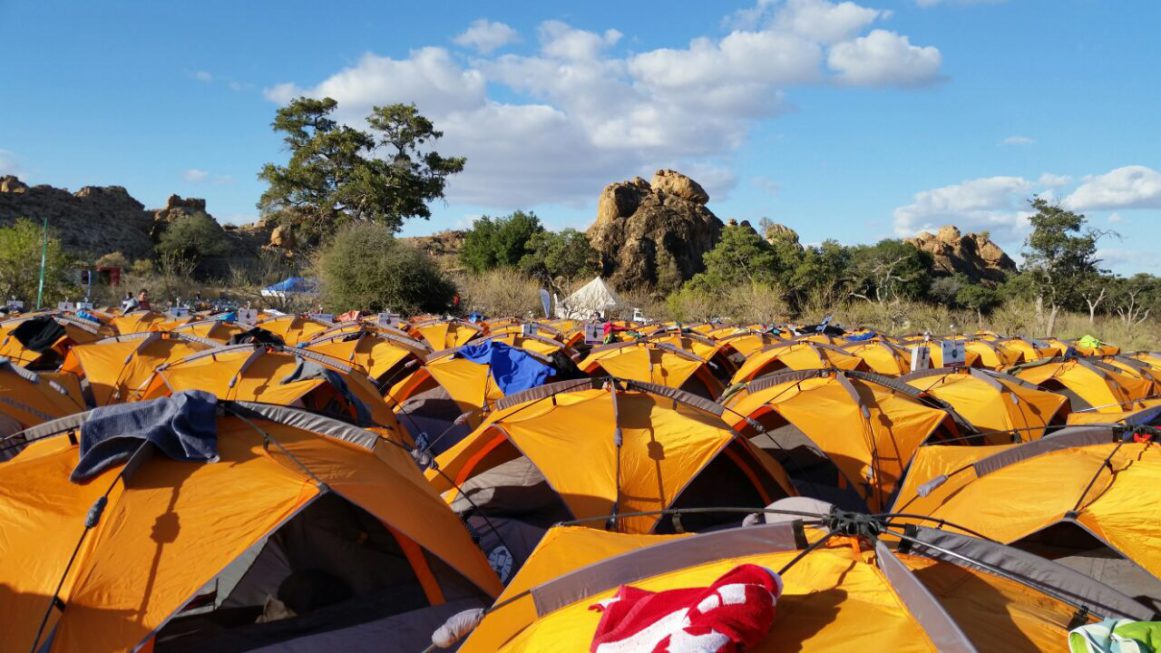 So what’s been happening so far this year? I had a deal with Peter that I would run one of my favorite races -...

Lunar Chicks take on the Beast (Because girls are not just compulsory equipment…)  Running, riding and reading maps...