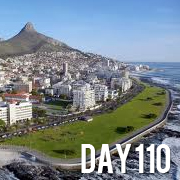 Its been quite a week! We had an amazing time in Vredendal with Pippa and Riekert Botha and friends from the Kalahari Augrabies Extreme Marathon Adele and Alwyn Maas. Just when we thought we had met the most hospitable people in SA we encountered Vredendal! A special mention must be made of Vredendal’s farmer/masseur who gave me the best massage I have ever had. ( Pete has been adamant that massages will make me soft – so when I told the legend masseur his response was “ag toe maar, ek is n boer met growwe hande dit sal jy nie sag maak!” Hilarious!)

From Vredendal we headed to Elands Bay via Lamberts Bay and had a fabulous rest day and a good few nights at Mark and Alecia van de Velde’s awesome home in Elands Bay. The surf was firing and Peter (and Hannah)spent many hours in the water on rest day.

Our next stop was Paternoster via Velddrif where we stayed with friends Toni and Alon Shina. What a brilliant surprise to find Mike Denison and Sean and Lynne Price from Buccaneers in Chintsa staying over with them too. And how fortuitous to have all those legend E Cape folk around when we awoke at midnight to find the thatched roof of Toni and Alon’s house on fire! After much heroic firefighting and after the eventual arrival of the fire brigade many hours later the fire was brought under control and the house was saved! After a sleepless night I set off again the next day with TJ and Clive Norman in the freezing cold and intermittent rain via Langebaan and Yzerfontein to Melkbosstrand. We spent today running with a magnificent view of the looming Mountain and will arrive as planned in Seapoint tomorrow. We are grateful to the Protea Hotel in Seapoint for putting us up.

[noteblock] What a milestone to be arriving in the Mother City at last![/noteblock] 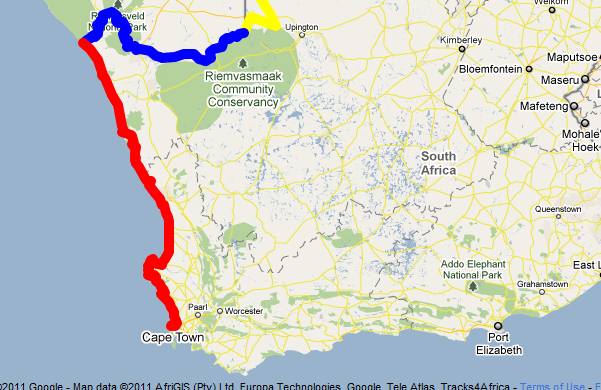 52 km day mostly on beach at spring high! A great relief to touch the South pier of Durban Harbour 🙂 Being...

Big day today, 56.5km on the beach, touched down at the border of Mozambique 4km north of Kozi Bay earlier this...