Wild Woman on the Run 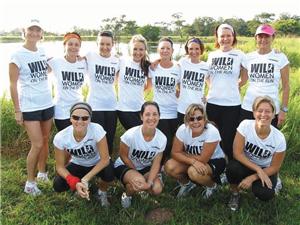 Everyone should run. Women especially should run (because we need to juggle more stuff and are often involved in some way with men.) And when you run, trail running is the best kind, without a doubt (no road rage and very good for your head). Trail running with beaches is possibly the closest anyone will get to heaven without actually being there. Plus it makes you feel like a Goddess (even if you are not) and eliminates the need for counseling of any sort. With all this in mind a group of us were chatting and running along the beach (as we do) one day shortly after I had returned from Tri the Beloved Country, my 6 762km running/cycling/paddling trip around the South African Border. I was probably rambling on ad nauseam about how awesome this county is in general and how spectacular the Wild Coast is in particular and how I couldn’t wait to run it all again as soon and as often as possible and how it was absolutely critical for everyone to run bits of it every year. Lucille, (who is much more organized and logical than me and almost everyone I know) agreed but pointed out that a lot of our running buddies would be unable or un-keen to run the coast alone because of safety or to enter an organized race because of a combination of the following hurdles: they didn’t have the money to enter expensive multi day races/,they didn’t have the confidence or experience to enter them and would be afraid of coming last or running alone all day/ didn’t want to run with lithe whippet-like runners in cool matching lycra kit who made them feel inadequate and grumpy.

These were all valid points. As a solution we decided on the spot that the obvious answer was to organize a group of mates and do it ourselves. Expenses would be minimal as we would simply split the actual cost of the trip and make use of our wide network to find beach cottages at stopover points.
An obliging husband would be found to drive our back-up vehicle. There would be no entry fee. The plan was simple: we would create a fun, non-competitive safe and nurturing environment for women to go out and have a cool multi day adventure in a place of devastating natural beauty. It would not be a race. Stopping to swim in rockpools and to drink cocktails at friendly hotels would be obligatory.

Lucille and her sidekick Jess from Lifestyle Health and Fitness swung into action and very shortly a date was set and we had a core group of women of varying abilities (ranging from someone who had never run in her life to someone training for the Comrade) and spanning 3 decades. The name “Wild Women on the Run” stuck from the outset. The only selection criteria was “no whiners and no duds”. In no time at all there was a waiting list, training schedules were drawn up, group runs were organized, routes were finalized and meetings were held where I would chat about kit, footcare, backpacks and their contents, river crossings and what kind of champagne ought to come along. Lucille took care of the more important things like transport, accommodation, food. Some of the Wild Women didn’t own a decent pair of running shoes and Lucille managed to get K-Swiss on board who kindly offered to supply shoes at discounted prices and provide us with funky T’s whose logo was designed by Lisa (one of the particularly Wild Women.)

Before we knew it we were setting off on the last week-end of April for Mazeppa Bay. There was a carnival atmosphere as we said jolly farewells to our families (most of the Wild Women are moms, many of whom had to unclamp weeping toddlers from their knees in order to be on their way) and piled into the 2 buses that would shuttle us to the start of our 90 odd km adventure. Our talk muscles were exhausted on arrival 3 hours later and we hadn’t even started yet!

Day 1 Mazeppa Bay to Trenneries 30km
In nearly 40 years on this planet I am yet to experience anything that can match the pure unadulterated joy of finding myself running in some wild and beautiful place as the sun rises and the light is at its most glorious. To revel in the exquisite beauty of nature, the strength of one’s limbs, lungs and heart and the matchless sense of freedom that this heady cocktail produces is an ecstasy second to none. To get to share this with 16 hilarious, wise, strong fabulous women and a couple of Ngunis…well, that is just in another league altogether!

In answer to our many prayers, the Eastern Cape was on its absolute best behaviour – the sea was a sparkling blue, there was a gentle westerly breeze and the sun shone down on us. The terrain is perfect mix of long beaches and grassy tracks with short bursts of more taxing rocky or sandy terrain. After crossing a number of small streams on hands and knees with feet pointing heavenwards (to keep our shoes dry – what a sight it must have been!) we reached the river at Wavecrest. Most of us decided to brave the icy water to swim the river although there was a rowing boat available to make the short crossing for R10 (bodies) and R5 (backpacks). We lounged on the grassy slopes of the Wavecrest Hotel and were amazed at the hospitality of the staff and management who warmly received us (by now a rather motley crew) and plied us with drinks and cold water to refill our packs. The next river is the Kobonqaba River renown for the electric rays that lurk on its sand banks – this river was crossed with much hilarity but only imagined incident and the end of day 1 was almost in sight. One more stop at the Jacaranda Wreck for a fabulous photo shoot and rendition of the Titanic theme song and we were done for the day. There was a bustle of activity as Vicky the pressure point therapist worked her magic on some of the walking wounded, Jess led us through a stretch routine and I gleefully set to work with friars balsam, needle and thread on a variety blisters. The Wild Women were all sound asleep by 7.30pm in their dormitory type accommodation with bellies full of fresh fish and succulent fillet prepared by our beaming and uncommonly obliging hosts (Robyn, Mike and Pete) and the champagne was largely un-drunk on night 1….

Day 2 Trenneries to Haga-Haga 32km
Everyone was substantially less chirpy as they rolled up their sleeping bags the next morning and it felt rather apt to be in sight of the wreck! An early morning dolphin sighting soon got us into the right frame of mind and as tired muscles warmed up the group was soon back to peak enthusiasm. After some soft and taxing beach running, we crossed the Kei River on the pont and trotted over the hills to Morgan Bay to the applause of all the holidaymakers enjoying the great weather and the long week-end. We re-grouped on the beach at Morgan Bay for a fabulous swim and then visited the beautiful new pub at the Morgan Bay Hotel for some welcome cokes. From Morgan Bay it was just a chip and a put along the spectacular cliffs, across the river at Double Mouth and day 2 was soon in the bag culminating with another great swim and a wonderful dinner at the Haga-Haga Hotel. I had initially been concerned by the difference in ability and speed in the group but was amazed at how easily and happily things worked out with the runners battling injuries starting ahead of the pack in the mornings while the front runners (one of whom was clocking up Comrades mileage) happily trotted back and forth to fetch or simply lay on the beaches or had a swim while the slower runners caught up.

Day 3 Haga-Haga to Glen Gariff 28km
We were greeted on our last morning by the most spectacular sunrise as we set off bright and early to avoid the worst of the predicted 30’ heat. The first 6 km’s from Haga-Haga are very rocky and technical and we picked our way across the rocks unable to get into a rhythm. At last we hit the spectacular long white beach that stretches from Rooiwal all the way to Chintsa – our relief was short lived. In our anxiety to miss the heat of the day we had caught the tide too high. The beach seemed to stretch on and on forever and the welcome sight of Chintsa, didn’t get any closer for what seemed like a very long time. The long tough beach was not made any easier by the fact that some of the women were suffering from having filled up their packs with bad water somewhere along the route and were dehydrated and nauseous. We regrouped on the beach at Chintsa East where one of the Wild Women’s husbands was waiting with a crate of cold cokes and then, after treating the holidaymakers to a demonstration of our “hands and knees river crossing technique”, had a wonderful swim in the Chintsa tidal pool. Suddenly we were only 8km from home and the reality hit us that the much anticipated adventure was nearly over..

We slowed down and stuck together hoping to make the moments last and all ran across the Glen Eden beach together to be greeted by friends and family – an emotional moment for all of us. I was so proud of all the Wild Women for making it home, especially those who struggled with injuries from the beginning and had to dig really deep.

In addition to having the most wonderful week end of fun and running we also managed to raise over R30 000 for our charities of choice Bus Fare Babies
and African Angels. Yahoooooo!

I have had to delay my Wild Women on the Wall feedback while I allowed my stash of adjectives to replenish itself....

Lucille had been devoting so much time to requesting divine intervention for the WW on the Wallweather, that she...