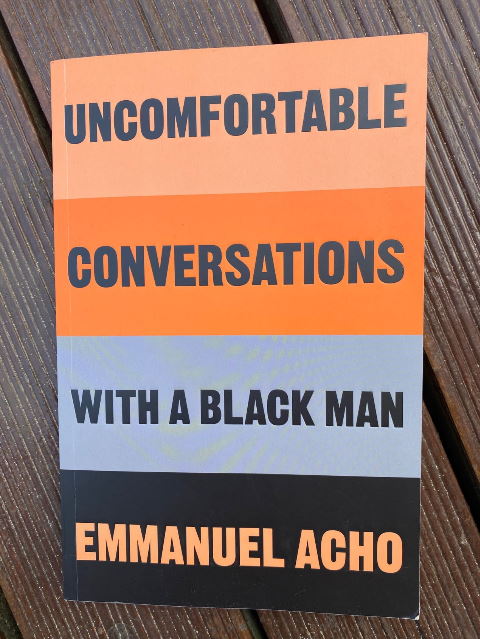 This is a great book. But it is a great American book. We need more books like this (and similarly uncomfortable conversations) in the specifically South African context. Emmanuel Acho talks about slavery.  And he talks about the N-word but he doesn’t talk about Apartheid or the K-word. We need South African speakers and authors to have these dialogues, because while (I imagine) there are many things similar about being black in America, I imagine that there are also many things that are vastly different.

We should openly, truthfully, kindly (if possible) have our own hard conversations about Clicks and Brakenfell and Senekal. Still, this book provides a helpful guide and a good starting point.

Emmanuel Acho is 30 years old. He is the son of Igbo Nigerian Immigrants and a first generation American who grew up in Texas.  He played for the NFL and has an advanced degree in Sport’s Psychology. Earlier this year he began a series of YouTube interviews (with the same title as this book) hoping to make a positive impact on issues of race in America. His channel quickly became a sensation and a book was the logical next step.

He is wise and warm and woke and funny and serious all at the same time.  He is sometimes shocking. He has astonishing empathy and a lot less rage than I imagine he should have. He is surprisingly gracious while speaking truth to power in a steady voice.

He deals with questions around individual racism, systemic racism and internalized racism in a logical and thoughtful manner.  He discusses white privilege in a way that makes it impossible not to grasp.  He explains what it means to be an ally and carefully clarifies that it requires a level of sacrifice. Sometimes a significant sacrifice.A willingness to give up the power bestowed on you by your own privilege. He challenges me to look and listen harder. And to notice every day how white as “normal” remains our default (and not just in the USA where white still = majority. For now.)

He makes the point that reverse racism is a myth in the American context:

Of course he is talking about the USA where black people are still (for now) in the minority. But I would like to have this distinctly uncomfortable conversation in the South African context.  Where white folk are a tiny minority but still own most of the land, control the economy, the wealth…..  the old boys clubs….yet the government is black. Can reverse racism exist in this context? I don’t know. But it’s an unnerving conversation I feel compelled to entertain, especially after reading this book.

In the context of Affirmative Action (USA) or Employment Equity and Broad Based Black Economic Empowerment (RSA), another particularly difficult conversation, he has this to say:

“Believe me I sympathize with feeling like the work you put in isn’t paying off, like you deserve something you didn’t get, like odds are stacked against you.  That said there is a definite difference between a kind of unfairness that befalls you as the unintended effect of a policy that’s rationally, empathetically trying to right years of wrongdoing and the kind of unfairness that is pursued as an end in itself.  Think about that: the unfairness black people have experienced has been the point of systemic racism (my emphasis) not the by-product of some other objective.  What white people experience as unfairness as a result of Affirmative Action does not have as its aim being unfair to white people. And therein lies the main difference.”

I underlined that a number of times and will make reference to it repeatedly in future hard conversations.

He is realistic and pragmatically hopeful in what he believes is achievable.  He believes that people can evolve and he shares some compelling stories illustrating this point (including one about Hilary Clinton).  He finishes by saying:

“Ending racism is not a finish line we will cross.  It’s a road we will travel.  ….It involves looking for the gears we haven’t used yet….” As an endurance athlete and as a person who vacillates between hope and (sometimes) despair for this beloved country, I find these images strangely comforting.