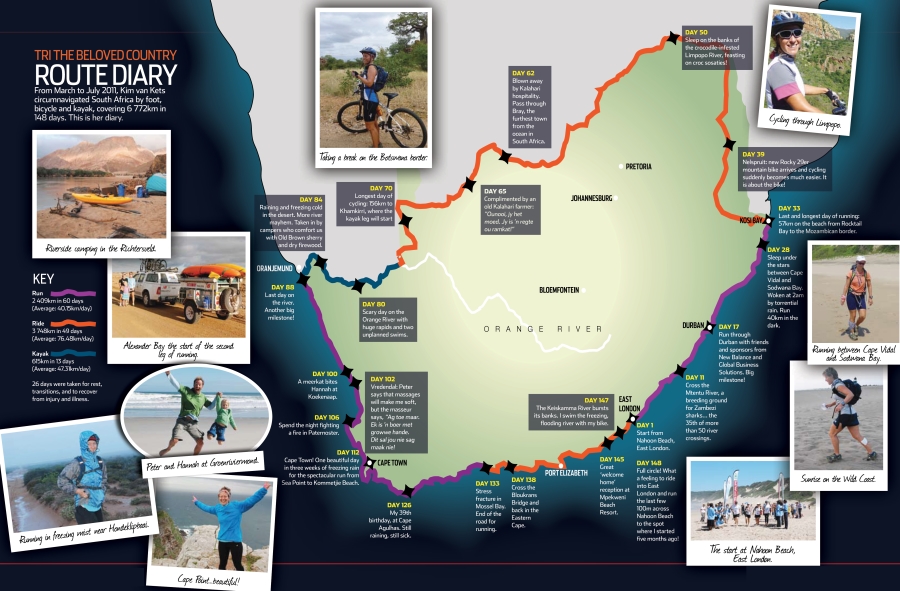 One of the most remarkable things about Kim van Kets is that she appears to regard herself as an ordinary woman. She has a point: like millions of women out there, she juggles a career, marriage and motherhood. She finds time to take roses to her widowed mom every week. She runs to stay in shape, often and usually far. But that’s where Kim’s ordinariness stops – pretty much at the marathon mark, really – and extraordinary takes over. Because, for Kim, ‘far’ has never been quite far enough. For Kim, ‘far’ means out of the front door of her East London home, heading up the coast, only to return 148 days later, having powered herself around the perimeter of South Africa by foot, bike and kayak.

The purest forms of extreme sports or expeditions are always solo and unaided: the athlete pitted in an epic contest with the elements, alone and free. Free from everyday obligations and expectations, and free to focus on the adventure. Definitely free from having to entertain your five-year-old after running the equivalent of a marathon on the beach every day. And certainly free from needing to keep tabs on what the family’s going to eat for supper, how the home schooling’s going, and what the laundry plans might be when the nearest town is 100km away.

If Kim van Kets didn’t want to be free from her family, maybe she wanted to be free from fear. And stereotypes. And from hand-me-down notions of what is and isn’t a good idea. Maybe, like many other women say they do, Kim wanted to have it all: her career, her husband, her kid – and her adventure. Would that be easier than going solo?

From the start, this expedition needed to be hard. Circumnavigating South Africa’s borders is hardly a novel idea, but pushing yourself to the limit while doing so is. For instance, last year Jolandie Rust became the first woman to cycle around South Africa, but she stuck mostly to the tar. Kyle Meenahan walked the borders in 2009 and 2010, but that took more than nine months. And ‘Kaalvoet’ Jaco Swart walked it all too (barefoot, nogal), but he even had enough time to get married en route.

Kim’s self-imposed rules of engagement were simple. She would never go home, nor leave the route. She would rest for one day out of seven. Governed by the direction of the flow of the Orange River, she would circle the country in an anti-clockwise direction, running from East London to the Mozambique border; riding the inland borders (although skirting the Kruger National Park – access was denied); paddling the entire southern boundary with Namibia; and then running the Atlantic coastline to Cape Town, and on to East London. Daily distances would be decided by the reasonable scope of her endurance: 40-50km a day when running, approximately 100km per day on the mountain bike, and paddling from sunrise to sunset in the kayak. In the event of injury, Kim promised herself that if she couldn’t run, she would walk. If she couldn’t walk, she would cycle. If she couldn’t cycle, she’d kayak. And if she couldn’t kayak, she’d crawl.

“I wanted to do something for myself that was quite hectic. And to demonstrate to my daughter that moms are heroes too. To show her that it’s not just the domain of fathers,” Kim explains, tugging on her running shoes for the first time in three weeks after finishing her astonishing circumnavigation. Having stayed at home to look after their daughter Hannah while her husband Peter rowed across the Atlantic Ocean (twice), Kim had a hefty I-owe-you at her disposal. “Initially I was thinking of big races, but the longest race I could find anywhere was just over 700km, which seemed like nothing special and wouldn’t even make a dent in my 120-day credit,” she says. On the other hand, running the entire length of South Africa’s borders would have meant too much time away from her work as a legal consultant and corporate trainer (and too much time out of school for Hannah), but building in components of cycling and paddling would surely speed things up. To miss the malaria season and stay within budget, the equation was simple: 5 500km in five months from March to July.

As it turned out, Kim badly underestimated the task. The final distance of 6 772km, including climbs and descents and the Kruger detour, was nearly 25% further than anticipated. Yet, after 2 409km of running, 3 748km of cycling and 615km of paddling, she made it back to East London five days ahead of schedule.

Despite that record, Kim insists that she’s nothing more than a slightly above-average athlete. “My real ability,” she says, “is that I’m a complete tank, for want of a better word. I literally can keep going forever without really breaking down. If I have an ability, that is my ability. I only ever win races that no-one else is stupid enough to run because they’re so far, or because I’m the last woman standing. I have tremendous endurance, and I think it’s often a head thing more than physical.” Kim’s modesty is believable only because the vast distances proved too much for even her powers of endurance. On Day 133 in Mossel Bay, after two days of agony, she was finally diagnosed with a severe stress fracture in her left tibia, and immediately ordered to put her feet up, more or less indefinitely. She saw no choice but to cycle, one-legged, the remaining 650km home.

The real relentlessness of the expedition sprang from the banality of life on the road. Packing and unpacking, always on the move, always planning ahead. And from the monkeys. “I had no idea South Africa was so full of monkeys,” says Peter. “We were harassed by them all the time. If I’d had a paintball gun with me, it would have made my life a lot easier.” Peter’s job was to keep Kim’s life as simple as possible. Assisted by Kirsty, a gap year student who had volunteered to help care for Hannah, he split his time between the support vehicle, stocking up with sponsored food from the ubiquitous Spar, and keeping Kim company as she ran or rode. But Kim’s path and the route available to a 4×4 did not always converge. In such cases, Kim was often joined by colleagues from her sponsors Global Business Solutions and New Balance who had flown in to share in her expedition. But sometimes neither Peter nor her friends could make it, and then she was on her own.“I met so many women on this trip who looked at me in complete amazement and said, ‘Aren’t you absolutely terrified?’” Kim says. “I wasn’t always entirely certain what it was that they were so terrified of. But when I tried to unpack it, it seemed to be about thinking that there are evil South Africans waiting to pounce on you, ravage you and take all your stuff. “I know we live in a country where there is crime and I know you’ve got to be careful, but in the five months that I was on the road I experienced absolutely nothing but the most incredible goodwill from every single person I met on the way. We don’t have to be cowering behind our security gates and not experience what this country has to offer. It’s so beautiful and the people on the whole are so amazing. It was such a privilege to experience it first-hand.” “A lot of South Africans, both black and white, live in fear of each other,” Pete chimes in. “But not once on the trip did we feel threatened. Yes, there are small pockets of people in the big cities who create fear in the minds of people and in the media. And, sure, you need to be streetwise. But we were totally blown away by South Africa’s people. We had no negatives. The only negative we had was monkeys. I know that sounds crazy.”

The Transitions were the worst. From running to cycling was brutal in northern KwaZulu-Natal, only to be outdone by adapting from paddling back to running. After two weeks in a kayak, and six on a mountain bike, Kim could barely hobble from one cat’s eye to the next when she hit the road again on the West Coast. But nothing could stop her from putting in the miles. In KZN she had torn her calf muscle, peeled scabs off her sunburnt lips in order to open her mouth, and endured infected insect bites on her legs metastasising into pustulent boils. On the rampaging Orange River, which was running 10 times higher than normal, she had been ambushed by terrifying white water. Then the Cape winter rains set in with a vengeance, and the entire family went down with flu for three solid weeks.

But the show went on. “I learnt a lot from Kim about how to endure physical pain,” admits Peter. “She went through an incredible amount. It’s very hard to comprehend how far 6 700km is. Many times I would do 20 or 30 kilometres with her and be in pain when I stopped, but she would continue. Some athletes have the ability to allow pain to just become something that you get used to.” The wildlife was also extreme. Crocodile- and hippo-infested rivers could no longer be swum. A leopard emerged from the undergrowth onto the beach. Two-metre-long black mambas were regular roadkill, and lions roaring nearby made suffering a puncture with no support vehicle in sight a heart-stopping experience. Near Phalaborwa, buffalo, giraffe and buck appeared to roam freely, despite the fences. In Botswana, there were no fences. Elephant crossed and re-crossed the border at will. Compared to the predictable physical hardship and environmental dangers, the human factor consistently defied expectations. In the former Transkei, total strangers continually expressed concern for Kim’s well-being. In the former Venda, an entire village descended on the police station to welcome her family. Kalahari farmers thought nothing of it if the Van Kets’ pockets were empty when they overnighted. And in a lonely West Coast farm stall, there was no-one to be found at all: only price tags carefully attached to every item, and a bucket to drop your money into. It all added up to a massive reality check.

“South Africans complain an enormous amount about other South Africans and the state of our nation,” Kim says. “But I was impressed with the industry of South Africans, and in what good shape the country looked. I came home feeling so hopeful. There’s so much negativity and a focus on crime and what’s going wrong, but I only experienced what’s going right. It was incredibly heart-warming.” And if there was anything she could have left on the road, offered in return for the kindness of strangers? The legacy of her expedition, perhaps. Try this beloved country.

Kim to Speak at FEAT

Wild Woman on the Run to tackle 100km

GIRL POWER: The fifth Wild Women on the Run will see 26 participants run 100km from Glengariff to Mazeppa Bay in...

KIM van Kets loves running, and if she can run in wild and beautiful places, so much the better…