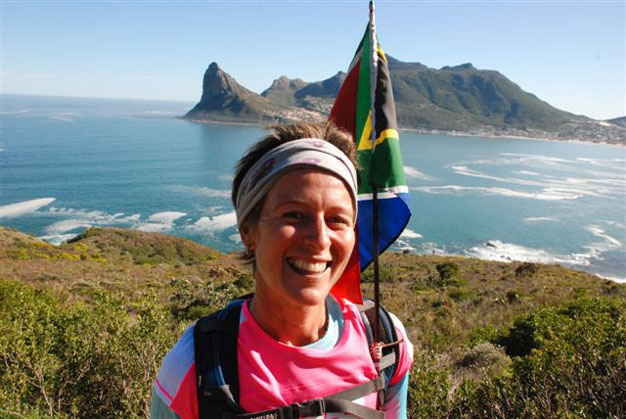 “Mama, Dada is an adventurer, hey?” “Yes,” I agreed, proud of how articulate she was (my genes, clearly). “And what does Mama do?” I asked, expecting any number of gratifying replies ranging from “hot-shot lawyer” to “hardcore athlete…”. “Oh you,” she answered dismissively, “you are a servant.”

– quote from ‘Tri the Beloved Country’ 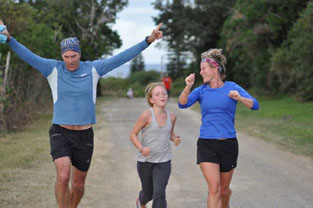 A defining moment in the life of Kim van Kets some five years ago. Her daughter, Hannah, four years old at the time, was the catalyst for making Kim’s dream a reality, for turning an idea into a definite plan. In March 2011, Kim embarked on an incredible journey, a physical and mental challenge that has put her right up there with the best of the endurance adventurers: Tri the Beloved Country, a 6,772km expedition that Kim covered on foot, bike and kayak, all over a period of 148 days.

Kim’s journey, details of which are covered in her brand new book ‘Tri the Beloved Country’, took her from East London to the border of Mozambique on foot. She ran six out of seven days and covered a daily minimum of 42km along the coast. Once at the Mozambique border, she travelled by mountain bike through the inland borders, again riding six out of seven days and covering an average of 100km a day. The next leg of her adventure was kayaking the Gariep River from below Augrabies Falls to Alexandria Bay and then running to Mossel Bay via Cape Town. Diagnosed with a stress fracture at that point but determined not to give up, Kim completed the last 650km of the expedition by bike. 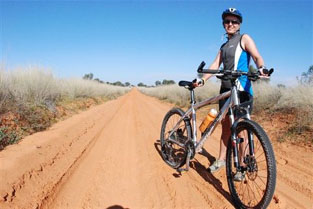 An incredible challenge and one which Kim speaks so modestly about. I know that if I had completed such a journey, I’d be shouting it from the rooftops!

Raised in the rural areas of the Eastern Cape, Kim grew up with two older brothers and an older sister. Despite the family being generally very sporty, Kim considered herself to be the bookworm of the bunch – although she played sports, she wasn’t quite as passionate about it as her siblings and much preferred to read. However, Kim often joined her brothers on hiking expeditions but never took them up on their invitations to join them in running… until one day when she was 17 years old and she decided to give it a go. She was living in King Williams Town at the time and went for a little run around the crescent where she stayed, approximately a 2km distance. She remembers thinking to herself, “Well, that was easy,” and she ran it again. And then again. And she has been running ever since!

Kim explains how she discovered such freedom of movement through running and how joyful it made her feel. An incredibly robust woman, Kim has the ability to simply keep going. Road running came very easily to her and she ran the Comrades, Two Oceans and numerous other road races for many years. A turning point for her came when she completed her first trail run in Hogsback over a decade ago – for Kim, to be able to run and be surrounded by the beauty of nature at the same time, was incredible, and subsequently she was hooked.

Since that first Hogsback experience, Kim has run numerous off-road races including the Addo Elephant 100 Mile Trail Run, the 270km Transkei Ultra from Port St Johns to East London and the 250km self-sufficiency race across the Kalahari (KAEM).

At this point, after having run for half her life, Kim shows no sign of slowing down. Despite keeping very busy as a mother, legal consultant and motivational speaker, Kim already has plans for her next expedition – a journey which traverses the length of Africa, from Cape Agulhas to its northern most point.

Kim explains that an expedition of such enormity would probably take about nine to ten months to complete and that she needs to build up ‘credits’ with her husband, fellow Adventurer Peter van Kets (for her Tri the Beloved Country expedition, Kim was able to justify her ‘time-out’ after she had built up a credit balance of 150 days owed to her by Peter!).

With Peter’s next trip being a 7-week journey to the Arctic, in preparation for a North Pole expedition, Kim’s trip will hopefully take effect upon his return (once she has built up a very attractive credit balance!).

As if juggling work and motherhood and planning incredible journeys across our beautiful land wasn’t enough, Kim has also just written a children’s book entitled ‘The African Pig Tales.’ Although the book hasn’t yet been published, it is a wonderful story and will undoubtedly be another accolade attributed to this really rather formidable woman.

I believe that Kim van Kets has demonstrated very clearly to her daughter and to plenty of others out there that mothers are indeed heroes too. And I think that, quite rightly so, she has also proved to herself how amazing she actually is. Kim van Kets has unexpectedly inspired me and I am pretty certain that after reading her story in Tri the Beloved Country, she is going to inspire you too.

Around SA in 5 Months

D-Day arrives against all odds

(Against all odds) the stickers are on the car, the branding is on the kit, my lucky New Balance 875's have...