Its been quite a year so far 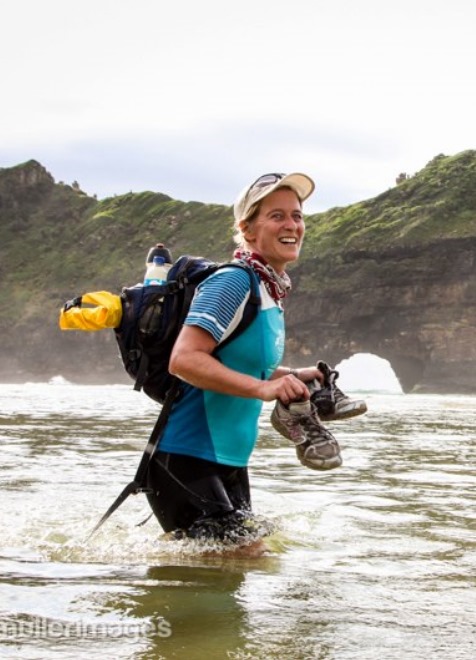 Its been quite a year so far and I have been extremely disciplined about running and the exact opposite when it comes to writing!
I totally love running the Transkei Coast and I can never resist the Transkei Ultra (anything between 250 and 280km depending on how lost one gets). I suffer terribly from FOMO if I know someone else is doing it other than me. The Transkei, and its Wild Coast beaches are woven into the fibre of my being. I learned to walk and spent winter holidays and every birthday at the Mazeppa Bay Hotel, we would camp and fish between Coffee Bay and Hole in the Wall for most of my childhood. My grandmother’s family spent 3 months at Hole in the Wall every year – travelling there by Ox Wagon from their trading store near Umtata. I have walked, hiked, camped, fished, run, been gilly for my father on many of its pristine beaches. And I love to run it because it allows me to join the dots. 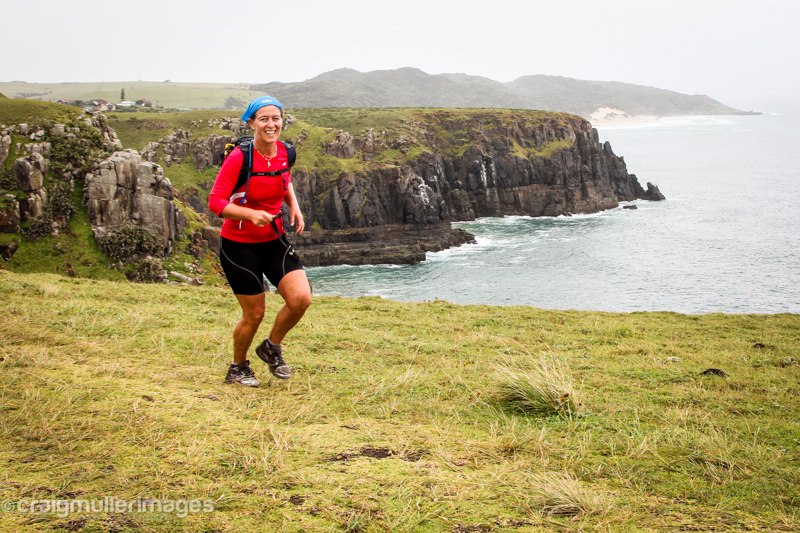 I love this part of the world with a possessive passionate fierceness that makes my chest hurt. The sheer drama of it. The fact that so few people know it as I do. What a privilege to have run every bit of it often, in both directions overdosing on its beauty. I read an amazing book about the survivors of the Wild Coast shipwrecks and the history of the coast, called the Sunburned Queen. As I am running along the beaches (and contemplating whether this is in fact paradise on earth) I cant help thinking about the shipwrecked souls along that coast and their treacherous journeys to Mozambique or to the Cape. Why on earth would they risk life and limb to get away from paradise? I can never imagine why they didn’t just punch the air in ecstasy and fall to their knees in gratitude that they had found heaven on earth and escaped Europe. Why not immediately marry some nubile Pondo lads or lasses and settle down to a life of plenty and ease rubbing their bellies as they quaffed mqomboti in the sun. But I digress…

And so I started the year off in early February with the spectacular Wild Coast Ultra. I had run the race twice before when the legendary Dave and Chel Gassner had been the organizers and knew from experience that in addition to the awesomeness of getting to frolic in my favorite place while everyone else was settling down to work, it would also keep me from being too lazy or slobbish over the holiday season. 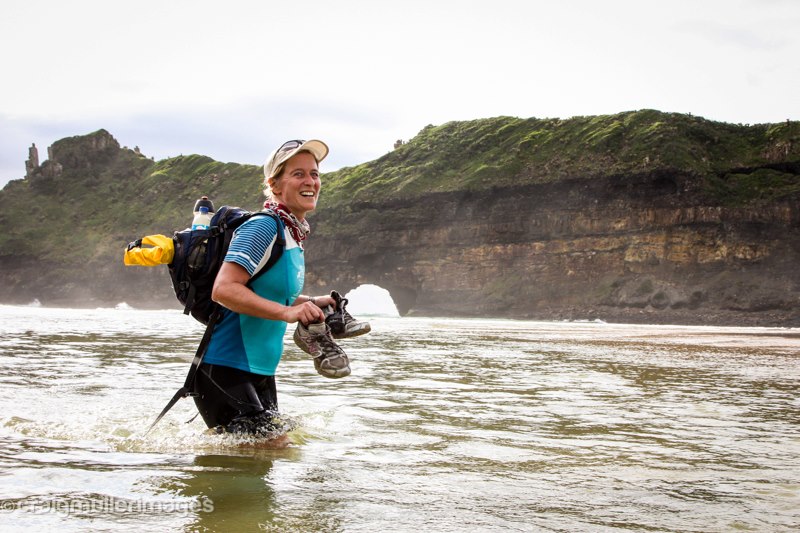 This year the route was shortened by 7km to allow us to start the race at the beautiful Umngazi Bungalows. We set off at the crack of dawn for the first and most brutal day (58km on my gps) of climbs and descents, soft beaches and big rivers, Ngunis, aloes, spaza shops and colourful huts and locals…

I was totally comfortable to run alone this time but almost immediately fell into a great rhythm running with Barbara and Jonathan and later in the day with Neil and Gitesh (the original members of the herd that had swelled to 12 by the last day!) As usual, on day 1 and 2 my only goal was to not get too lost, make it home before sunset and have loads of fun. The river at Mtagatyi provided lots of amusement – it was relatively low tide but as always a massive swim made more difficult by 40m of black sticky sinking mud on the far bank. We had to slither across on our bellies to avoid sinking in up to our waists and were delighted for my inside knowledge of the outdoor shower at one of the holiday cottages which allowed us to remove the worst of the mud! Our navigation was superb other than for a very minor detour in the famous dope-plantation-disguised-as-mielie-field- maze and we trotted on fairly happily and at a good pace all day. As weariness began to set in we were ecstatic to see the crew waiting for us at the Umtata River mouth – the last river of the day and one of the few that I will only cross on a rowing boat. This signified that day 1 was in the bag and that a relatively easy 7km was all that was left to make it to Coffee Bay where we would be spending the night at the Ocean View Hotel. 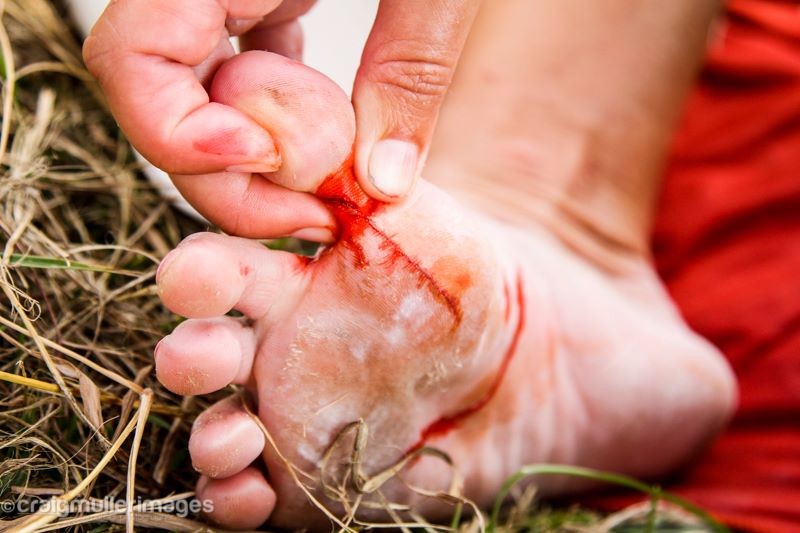 That cut was from barnacles.

Day 2 began as always with aching quads which were quickly forgotten because of the astounding beauty of our surroundings. The coastal path between Coffee Bay and Hole in the Wall is unprecedented and simply breathtaking every step of the way. The growing herd (Shane and Paul joined us on day 2 swelling the ranks to 7 and lowering the tone ;-)) were operating splendidly as a team by this stage and starting to share a lot of banter. Jonathan would be constantly mocked for the slowness of his foot care routine at every river, Shane for his grandfather status, Barbara and I for our excessive testosterone, Neil for the fact that he was a geriatric….

Day 2 finished at the Haven and measured another solid distance of 48km, the last 2km dragged on for what seemed like forever in the blistering heat and we were delighted to get in early and spend some good recovery time in the pool.

The rest of the week past in a blur of spaza shop ginger beer, pain, beauty and cameraderie: the Haven to Mazeppa Bay, Mazeppa Bay to Seagulls, Seagulls to Haga-Haga…on the 4th day we ran in a pumping Westerly headwind which turned an otherwise easy day into a real challenge. On day 5 we ran in cold and rain (and some of the herd ran with a babalas and 2 hours of sleep)! Before we knew it we were over the pont, back in civilization and getting together for our last night at Haga Haga. 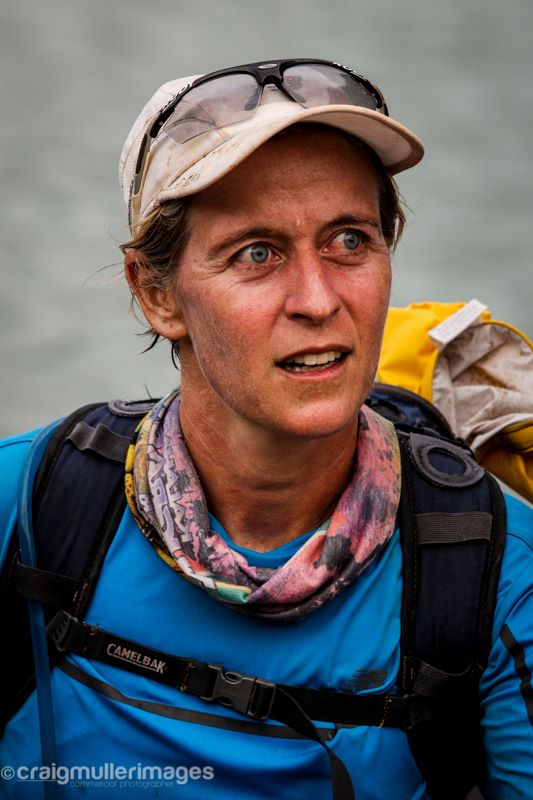 I hadn’t been entirely certain if the new organisers would be able to preserve the ethos of the race (hardcore, no sissified supervision or over regulation) but was amazed and delighted that they not only managed to do so but also brought so much to the race (Alan our super-medic, Liam’s awesome 83 year old Dad, lots of fun and lucky draws etc etc) without detracting anything at all from what has always been an awesome event. I will certainly be back again next year – this is the only race (other than the Kalahari Extreme Marathon) that I would happily run every year.

The next race on the agenda was the Addo which also has a very special place in my heart. I was extremely over confident (as usual) about having a great run despite the fact that it was only2 weeks after the Transkei Ultra. No worries, I would have put in a lot of training especially on hills so I was bound to have a great day. The route, the terrain, the weather, Addo were all wonderful. I was also delighted to be running with Cath Andersen so the company was fabulous. But right from the very start things didnt feel good. My feet ached, my joints hurt, I struggled on and off with nausea. In between the waves of pain and nausea I would recover and feel good for a couple of kms but on the whole I was digging deep from the beginning. The highlight of the run was stopping to swim in the most beautiful pool with clear cool water and a pebble bottom being constantly topped up by a tinkling little waterfall. 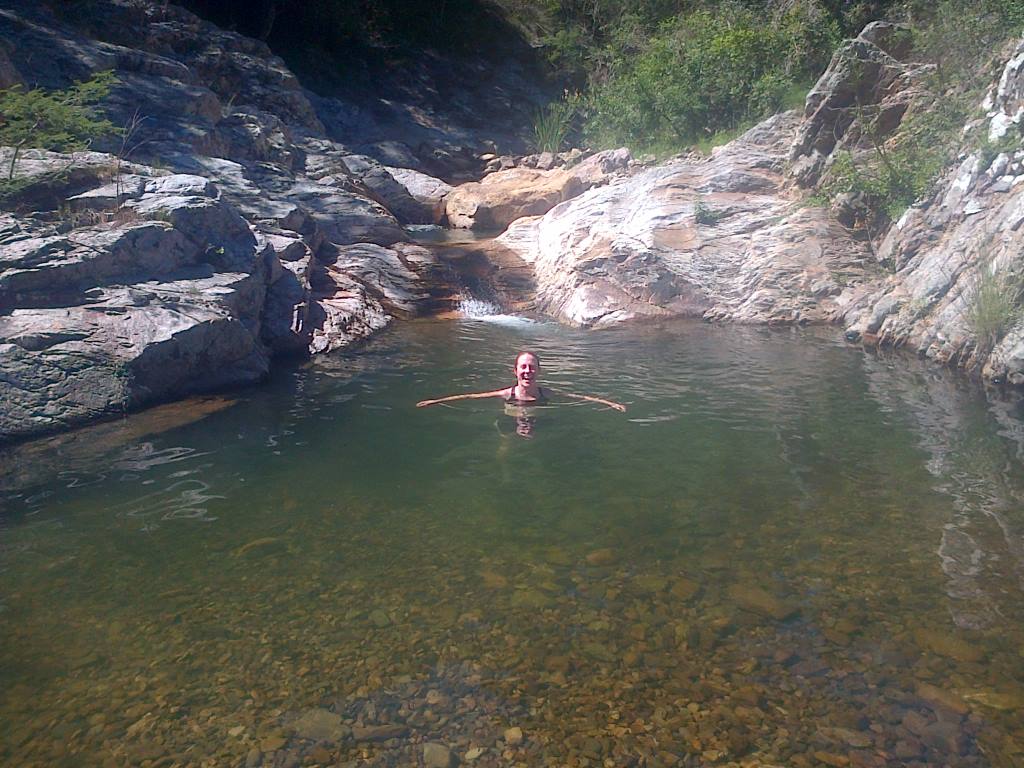 It would have been so easy to run past it without stopping but am so glad Cath and I decided to carpe diem – I will remember that pool when I am 80! With 20km to go I started to really battle with nausea and could no longer keep liquids down. The last 15km were a real test of endurance as I really just hung in for the last few km’s intent on making it home in one piece and before sunset. Its so seldom that I have a bad run (they are usually characterized by absolute joy) that I actually welcome a tough day out. It reminds me never to be complacent about the trail, especially 80 odd kms of it over tough terrain, and it reminds me of how blessed I am that it doesn’t usually feel this way! Every bad run is followed by a 100 good ones, so I am looking forward to the next couple of months! 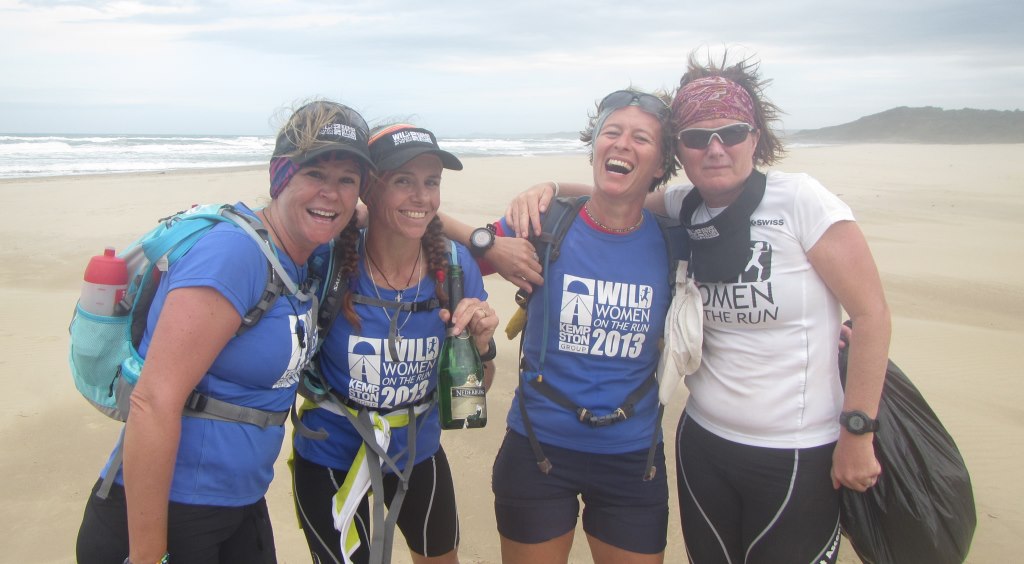 And then it was the 2nd edition of Wild Women on the Run. This time round we decided to run the 92km over 3 days in the opposite direction – starting at Kwelera and finishing at Mazeppa Bay. About half of our 20 Wild Women were new to the group and some were newish to running. This is so much part of the experience for me – to really nurture women into the joy of running. As before, it was a truly joyful long week-end. I feel so privileged to have been on this journey again. 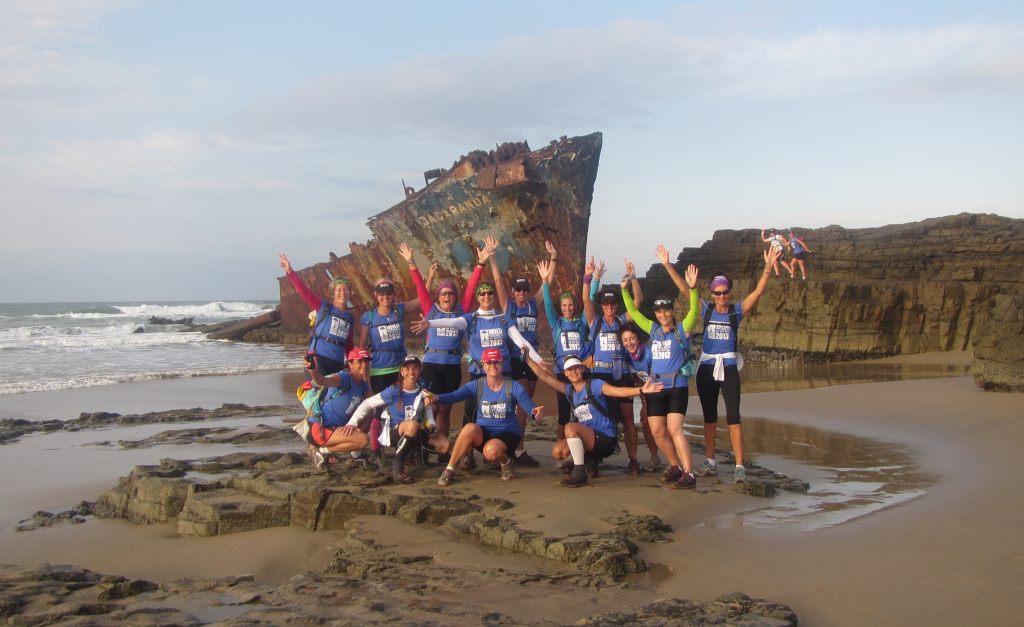 For some of the women the journey began months ago, and I am especially proud of you. You have all inspired me and have reinforced my belief that running is so much more than what it seems. It can be the catalyst to change lives, build confidence, form life long friendships, bring us closer to God….its the most rewarding thing ever for me when people (especially women!) get it! 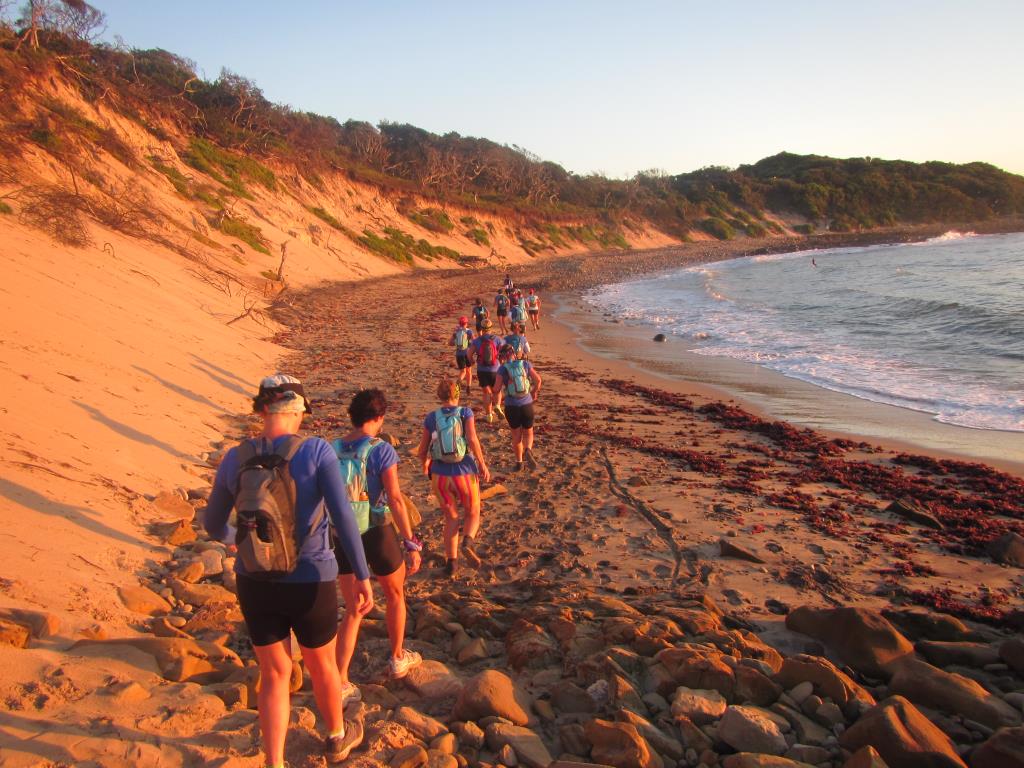 Over and above the amazing experience of doing the run, soaking in the beauty, enjoying the time off from family responsibilities etc etc we also managed to raise approximately R73 000 for our 2 charities: Busfare Babies and African Angels. 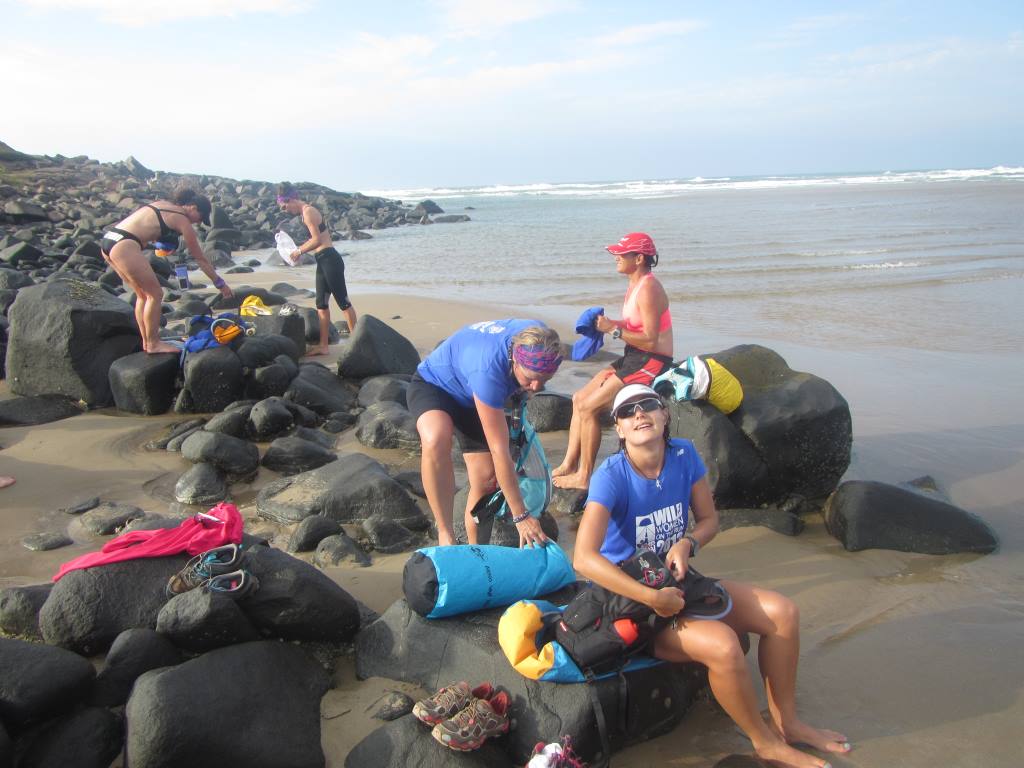 The rest of the year is looking fun and busy with Pete and I planning to run the 3 day Southern Cross run as a pair in August, the 100km Hobbit in October, hopefully the Skyrun in November and also hopefully the 600km Indlela Yabantu in September. Life is good when you run! 

Thanks to Craig Muller who took the pics

I’m running a 100Miles/160km in 4 days and the website countdown thingy is causing me a lot of anxiety.

A Decade of Fabulous

Wild Women began as the dream of two Eastern Cape women and rapidly became a reality in 2012. The plan was to...